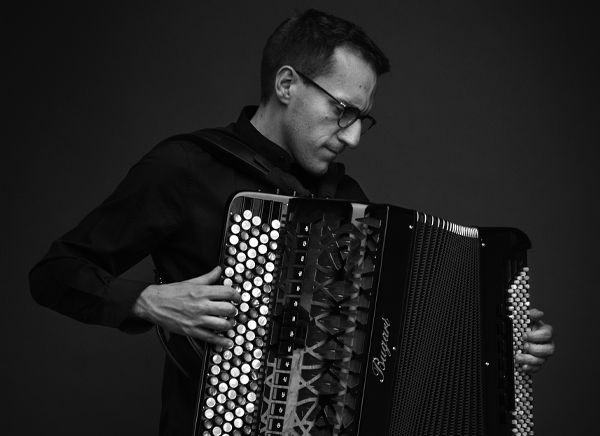 Félicien Brut has become, in a few years, the representative of the accordion in the new generation of classical musicians, defending the polymorphic characteristic of his instrument, and helping to create new repertoire dedicated to him in chamber music and with orchestra.

Born in 1986 in the Auvergne Region, the ultimate land of traditional music, Félicien began his musical training at 6 years old, with a first approach of the popular musette repertoire, inherently linked to his instrument’s history. In 1996, spotted by Jacques Mornet and Nathalie Boucheix, he entered in the National and International Academy of Music and Accordion (CNIMA – J. Mornet) where he discovered, through the numerous French and foreign accordionists, swing, classical and contemporary repertoires. Without choosing an aestetic over another, he soon confirmed his desire to work with all styles and his wish to consider the musical act as free of any constraints, prejudices and any reportorial barriers.

In April 2016, Félicien releases his first album Soledad del Escualo with the Trio Astoria, ensemble dedicated to the Nuevo Tango by Astor Piazzolla, however the year 2017 marks a major turn in his carreer. He chooses to surround himself by the Quatuor Hermès and the double bassist Edouard Macarez to bring the project « Le Pari des Bretelles » to life : with the objective of bringing together classical music and musette. The success of this formation is immediate and leads him to perform in prestigious concert halls and festivals such as « La Seine Musicale », « Les Flâneries Musicales de Reims », les « Folles journées de Nantes et de Tokyo »…

In July 2018, Félicien makes his debuts with orchestra. He is invited at the festival Un Violon sur Sable in Royan for the world premiere of Caprice d’accordéoniste, concerto for accordion and symphony orchestra, which was commissioned to composer Thibault Perrine. In April 2019, he premieres with the concerto Souvenirs de Bal with the Orchestre Symphonique de Cannes. Meanwhile, he continues to carry many chamber music projects with several of the most brilliant artists of his generation : guitarist Thibaut Garcia, trumpetist Lucienne Renaudin-Vary, mandolinist Julien Martineau. In 2020, he commissions a new program, Neuf, for accordion and sting quintet, still with the Quatuor Hermès and Edouard Macarez. The album of this project is released in the fall of 2020 with the label Mirare. It is an hommage to Beethoven, through nine original work signed by promising young composers.

In 2021, Félicien is paying tribute to the tango master, Astor Piazzolla, in the occasion of the centennial, with a quintet gathering violinist Jordan Victoria, guitarist Thibaut Garcia, pianist Thomas Enhco and double bassist Edouard Macarez. He will also premiere new work for accordion and orchestra, as well as a piece by Thierry Escaich, for accordion and trumpet, which will be premiered in 2021 alonside Lucienne Renaudin-Vary.