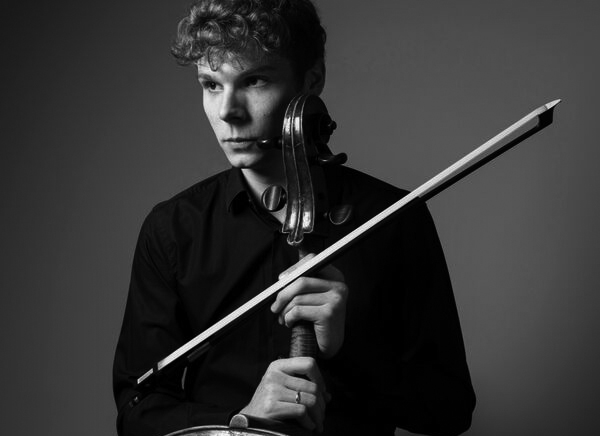 Born in 1993, Bruno Philippe studied the cello at the Conservatoire National Supérieur de Musique de Paris, with Raphaël Pidoux and Jérôme Pernoo, and chamber music with Claire Désert. From 2014-2018, he studied as a young soloist at the Kronberg Academy with Frans Helmerson and participated in masterclasses given by David Geringas, Steven Isserlis, Gary Hoffman, Pieter Wispelwey and Clemens Hagen at the Salzburg Mozarteum.

But the most memorable of the program’s three instrumental pieces – a cello concerto in G minor – showcased Philippe, sweetly aching in a duetting passage with Dunford and ferocious, without losing airy suavity, in a very Vivaldian Allegro finale].

His first CD, devoted to Brahms’ Sonatas with Tanguy de Williencourt, was released in 2015 on the Evidence Classic label. In 2017, he joined harmonia mundi with a recording of works by Beethoven and Schubert. In 2019, he recorded two albums dedicated to Russian music: Sonatas by Prokofiev, Miaskowsky and Rachmaninov with pianists Jérôme Ducros and Tanguy de Williencourt, and Prokofiev Sinfonia Concertante with the Frankfurt Radio Symphony Orchestra conducted by Christoph Eschenbach. In spring 2022 his latest album, J.S. Bach: The Complete Cello Suites, was released, with Gramophone writing:

Philippe’s principal virtues are the way he allows the music to dance and his easy, unforced manner of projection. It’s a set that makes auditioning these Suites in a single fell swoop (which is what I did when initially listening) as undemanding as it is rewarding.

This 2022-2023 season will see Bruno performing with l’Orchestre de Picardie, and he will collaborate with Tabea Zimmerman at Schloss Elmau. Bruno will also perform at the Max Festival in Belgium with Irina Lankova and Alina Pogostkina. Other festival appearances include Festival de Pâques, stART Festival, and Festival d’Auvers sur Oise. With Ensemble Jupiter, Bruno will be participating in a major tour of the United States, where he will perform concertos for cello by Vivaldi.

Bruno is a Larsen Artist and a Pirastro artist. When it comes to gut, he exclusively plays on Pirastro’s Oliv and Passione.